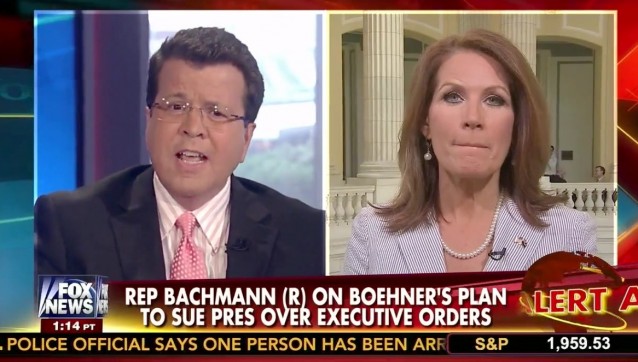 President Obama, according to our friends over at Think Progress, has issued fewer executive orders than any modern president. That’s not stopping the House from suing Obama for his rule by dictatorial fiat. Somebody should remind Speaker Boehner that the GOP is the party opposed to frivolous lawsuits.

But, as evidenced by this video, such lunacy is too insane for even Fox News to bare. Neil Cavuto turns on Michele Bachman and pretty much calls her an idiot.

Something is definitely happening over at Fox News. Last week Megyn Kelly turned on Cheney, last month Greg Jarrett turned on the police and even Rupert Murdoch has come out in favor of immigration reform.

So has Fox News finally realized it’s created a monster? Neil Cavuto appears to think so.