January 18, 2014 - Full Interviews With Our Guests, Journalists, The News From Around The World, Top Stories, Transcripts 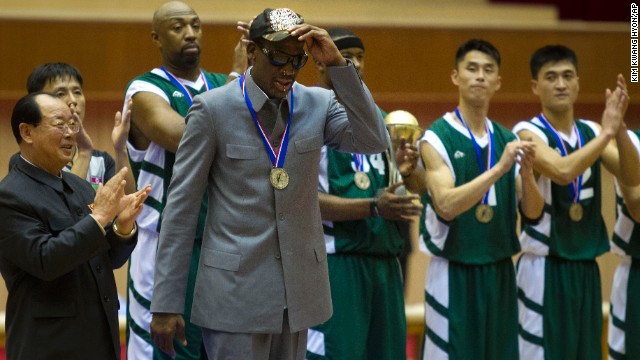 Dennis Rodman has checked himself into rehab less than one week after returning from North Korea. Hayes Brown from ThinkProgress.org says Rodman may have misled us about the charity he was reportedly playing for

Dennis Rodman makes his fourth trip to North Korea to play in what he calls a ‘charity basketball game’ raising money for North Korea’s deaf.  Not so, says Hayes Brown, who is a national security reporter for ThinkProgress.org. He joins us from Washington, D.C.

David: Today, you’re reporting over at ThinkProgress.org that Rodman’s agent and the sponsor of his trip know nothing about this charity for the deaf?

Hayes: That is correct. So, Rodman, when he first landed in North Korea, they told the Associated Press that the proceeds from this game, whatever those might be, will be going to a North Korean charity for the deaf. When I reached out to Paddy Power, the sponsor of the event, they directed me to Rodman’s agent. Then Rodman’s agents still didn’t give me any information about this charity. 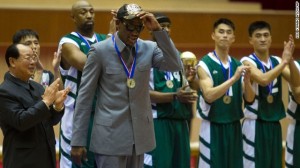 David: Who is Paddy Power?

Hayes: Paddy Power is an Irish bookmaking website, actually. They’re online gambling, and they decided to sponsor this trip for Dennis Rodman and several former NBA players to go over and play a North Korean basketball team and get all the publicity that comes with it.

But I do know that Paddy Power is no longer interested in the Rodman name. It turns out, right before the New Year, they pulled their name from the sponsorship saying they don’t want to be associated with North Korea anymore. Instead, they are just paying for the trip due to the contractual obligations of the agreement they already agreed to with Rodman.

David: This is his fourth trip. Were the three previous trips for charity?

Hayes: None of them were for charity. The first one was with VICE magazine to go and do a cultural diplomacy sort of thing. At that point, he struck up a weird friendship with Kim Jong-Un, the leader of North Korea, and at that point, he decided to go back, to everyone’s surprise, and he met up with the dictator again. And then on his third trip, he was coaching the North Korean Olympic basketball team a little – I mean, it’s unclear exactly what he was doing at that stage. So on this fourth one, charity, that’s why it’s a little questionable.

David: How does North Korea treat its deaf?

Hayes: The parents of disabled children are forced to move from Pyongyang, the capital, because they want to present a perfect city. They’re sent off to isolation basically where they can’t be seen or heard from, and their medical infrastructure is in no way adequate to provide for the disabled.

David: We’re on Pacifica Radio. Pacifica’s mandate is to promote peaceful dialogue. Dennis Rodman going to North Korea falls under the purview of Pacifica’s mission statement. Isn’t this a good thing? Isn’t this the right thing to do for one of our own, to reach out to a potential enemy?

Hayes: You’d think so, if Kim Jong-Un had shown any sort of willingness to have peaceful dialogue, to give up its nuclear weapons, to treat humans with respect and dignity, none of which seemed to be the case. The prisons are still full, labor camps are still active, and there’s just still no sign of any sort of improvement on human rights from the North Koreans, one of the reasons why the claims of this being a charity game were met with such skepticism. 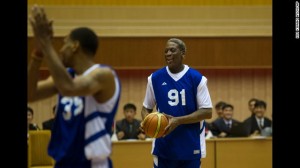 Rodman now says alcohol played a role in his calling the North Korean leader a friend.

David: Well, we know nothing about what’s going on in North Korea. There was a report that Kim Jong-Un last week fed his uncle to the dogs, and now we’re being told that just might be apocryphal.

Sending Dennis Rodman to North Korea, is it possible his real sponsor isn’t Paddy Power, but our intelligence agencies.

Hayes: I mean, anything is possible, but the U.S. government has been very vehement that Rodman has been acting as a private citizen. When questioned directly, they’ve said that they have not debriefed him on his trips. If they actually are the sponsor of Rodman going to North Korea, they are lying straight to the face of the media without blinking.

David: Yeah, because our intelligence agencies would never lie to us. The NSA…

Hayes: Paragons of honesty, those guys. But on this one, I’m pretty sure that Dennis Rodman is not the secret ambassador to North Korea.

David: It’s so bipolar, it just might work. I mean, it’s beyond crazy. No one would believe that Dennis Rodman was working for the NSA. But we know with certainty that North Korea is probably the worst of the worst, right? 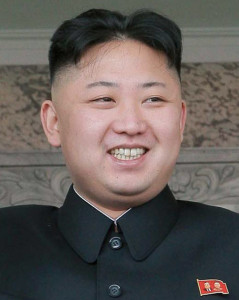 According to our guest nobody is sure if Kim Jong Un is really running North Korea.

Hayes: I would agree with that. I mean, it’s not just the U.S. and its allies saying this. A United Nations investigator early this year said that he had not seen the sort of atrocities perpetrated in North Korea since the time of the Nazis. That’s not an American government official, that’s someone from the United Nations saying this. And we get all these horror stories out from the defectors who actually make it out, the ones who risk their lives to cross the border to leave North Korea.

David: How old is Kim Jong-Un?

Hayes: That’s a great question. No one is really sure. They think his birthday is Wednesday, but that’s a guess. So one of the things is that this game is supposedly kind of a birthday present for Kim the younger. I think he’s supposed to be in his late 20’s, like 28, maybe 29. That’s one of the things about North Korea, their isolation is so all-encompassing.

David: It would be great if the NSA could find out what’s going on in North Korea.

Hayes: They’re trying as hard as they can, but North Korea is just so hard to penetrate that it’s almost impossible to get information out, even with our top people on it.

David: Maybe they should take a break from spying on Americans and find out what’s going on in North Korea.

Should Americans be reaching out to the North Korean leadership? Join the conversation below.