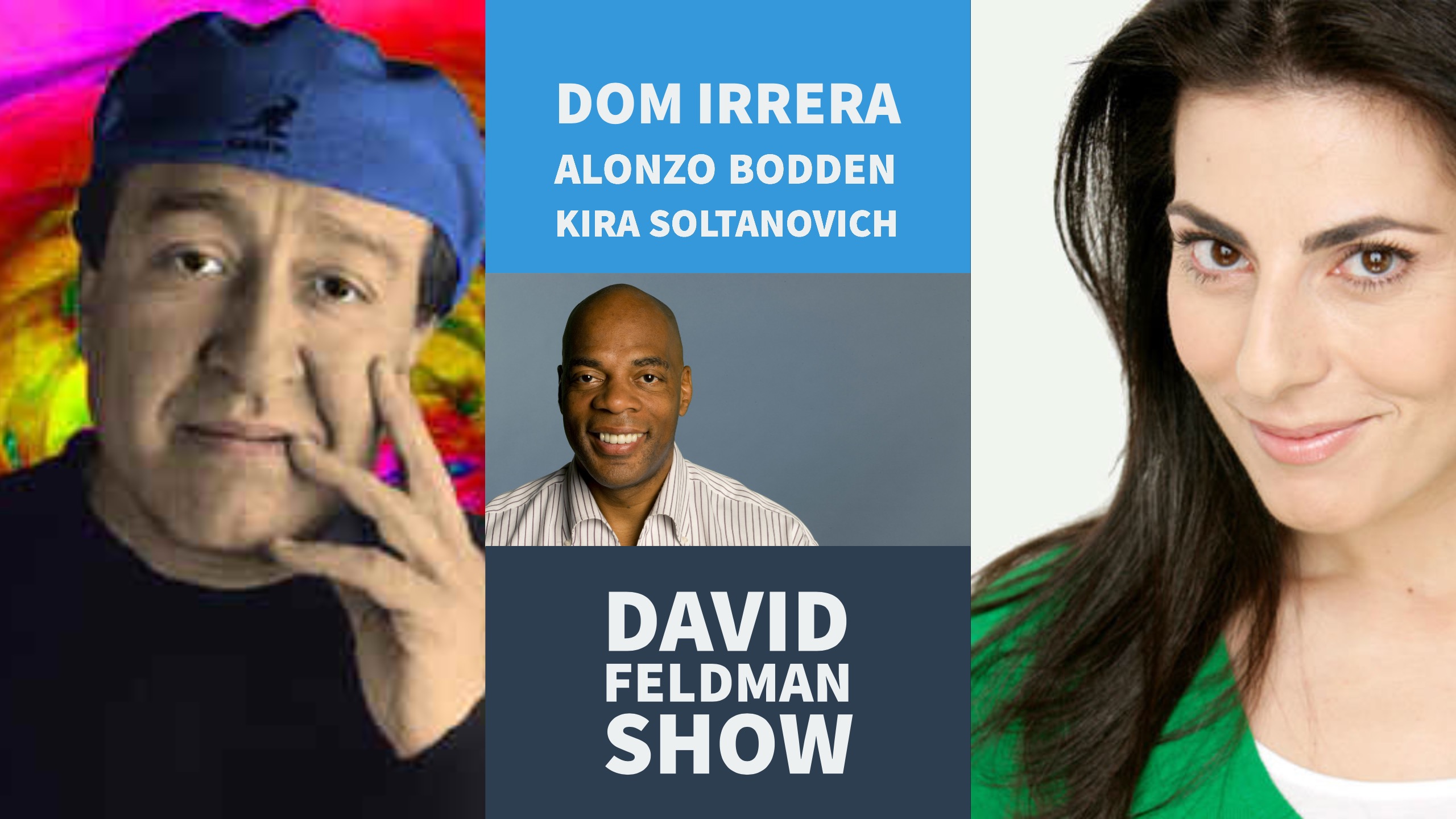 Three incredible headliners all on one show! Dom Irrera hosts Dom Irrera Live from the Laugh Factory on You Tube. On Dom’s podcast he chats up old and new comedian friends live on the world famous Laugh Factory stage with club owner Jamie Masada. Watch these comedy pals recount wild Hollywood tales, discuss their own lives, and consider the comedy business as it is and was.

Alonzo Bodden has performed on numerous television shows including The Tonight Show, Late Night with Conan O’Brien, Make Me Laugh, Late Friday, The Late Late Show, Comedy Central Presents and It’s Showtime at the Apollo. He is also a voice actor who has worked on Power Rangers: Lightspeed Rescue, Masked Rider, and O’Grady.He is a co-host of Inside the Vault on WGN America. Alonzo was a panelist on a BBC America year end special of Wait Wait… Don’t Tell Me!, as well as a recurring panelist currently on the weekly NPR show and podcast. He is currently a comedic panelist on Game Show Network’s Mind of a Man.

She was a series regular on How To Be A Grownup for TruTV, the hidden camera show Girls Behaving Badly and was a correspondent on The Tonight Show with Jay Leno for over 8 years. Recently, Kira co-hosted the game show Winsanity with Donald Faison for the Game Show Network.

Kira Soltanovich’s greatest achievements is shooting her latest 1 Hour Stand Up Special,You Did This To Me, which was completely self-produced and she shot it while over 7 months pregnant. The first stand up comedian to shoot a special pregnant!

Kira has appeared on The Jay Leno Show, Hello Ross! with Ross Mathews, Jimmy Kimmel Live, Last Call with Carson Daly, Hell’s Kitchen, Last Comic Standing, Set List TV, and The World Stands Up on Comedy Central. She has written for Joan Rivers, Scott Baio, Selena Gomez and Justin Bieber. And here’s an interesting fact, three of those people have dated each other.

Kira’s pilot Weren’t You Scott Baio? was optioned by New Line Television, her hidden camera dating show Who’s Got Game? was optioned by MTV and her feature film What’s Your Sign? was optioned by Terra Firma at Universal. For a while there, she and her writing partner were only developing projects that asked a question. Genius, right?

She’s been a writer on Easiest Game Show Ever, How’d You Get So Rich? for TV Land, Warning: Men Thinking, Raising Whitley and Prankstars on Disney.

Her half hour Showtime special is entitled Here Comes Trouble.