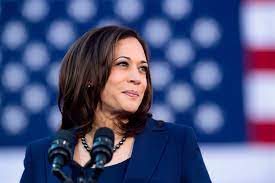 Vice President Kamala Harris goes down in history for saying THE absolute worse thing ever uttered by an American leader visiting a foreign nation. Harris chose Guatemala for her first official overseas trip. And her message to the Guatemalan people on behalf of America was, “Do Not Come.” Guatemalan immigrants are risking their lives escaping gangs, death squads and child malnutrition. And what does Harris have to say to those Guatemalans thinking of escaping to America? “Do not come.” She is the daughter of immigrants. We are a nation of immigrants. The only immigration problem America suffers from is not enough immigrants. Our population isn’t growing fast enough to sustain the economy or our social safety net. Only immigrants can keep Social Security, Medicare and our economy viable for decades to come. But Harris, like Biden and Barack “Deporter-In- Chief” Obama are craven political opportunists who scapegoat the most marginalized just to look tough. They are cowards. Kamala? How about YOU do not come…home?

Topics: High school reunions; Democrats won’t fight for democracy; Democrats warn of creeping fascism but can’t be bothered to make a case for the expansion of voting rights