January 22, 2014 - Full Interviews With Our Guests, Journalists, The News From Around The World, Top Stories, Transcripts 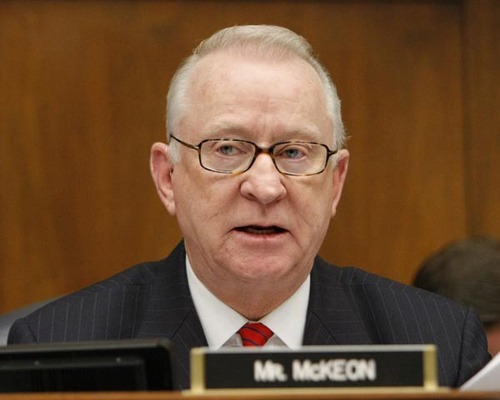 Chairman of the House Armed Services Committee, Republican Congressman Buck McKeon, representing California’s 25th District, announced today that he would not be seeking a 12th term. Here to give us a look back at the 75 year old’s illustrious past is Buck McKeon’s biggest Champion, the founder and treasurer of the Blue America Pac which raises money for progressive candidates around the country, Howie Klein. 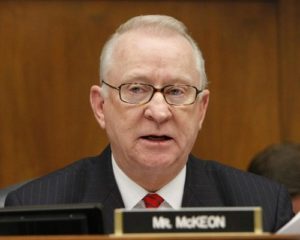 The House Armed Services Committee’s ranking Republican Rep. Howard McKeon, R-Calif. is the most corrupt politician in Washington, according to our guest Howie Klein.

David: You must be devastated by this news because for years you have written on your ‘Down with Tyranny’ blog that Congressman Buck McKeon is a degenerate gambler who owes money to Las Vegas potentate Sheldon Adelson. You accused Congressman Buck McKeon’s family of reaping a fortune lobbying for the defense industry while their dad sits atop the powerful Armed Services Committee. So, as you choke back tears, tell me is Buck McKeon not running for re-election for personal reasons? Is he cashing in to go be a lobbyist for the defense industry? Or is he afraid he just can’t win?

Howie: Yes, yes, yes yes. Everything that you just said is yes.

He is the single-most corrupt person in Congress and he’ll be joining his family lobbying firm, he’ll deny that, just the way he denied that he was going to be resigning. I’ve been writing he would be resigning for almost a year now.

David:  Why is he stepping down?

Howie: The demographic in the district is changing drastically. It’s much, much bluer now, it’s much more Hispanic now, and it’s much younger now. And Buck McKeon doesn’t fit in there.

He’s an old white Mormon, he’s like a fossil of some kind.

So, he probably couldn’t have won again and he has done very, very badly for himself financially. He’s in debt, he loses homes. His business went bankrupt. His personal financial life is a disaster. He’ll be 76 when he gets out of Congress and he knows he’s got to make some money now. And he can.

He has very, very good connections with the military industrial complex. He is the founder and the chairman of the Drone caucus. Those people have given him more money than any other member of congress and they will continue doing that as he’s lobbying.

He’s picking the guy who will be succeeding him as the Chairman of the House Armed Services Committee. Other people will fight him but he’s trying to pick Mac Thornberry from Texas, to succeed him and Thornberry is as big a shill as he is to those interests.

David:  He’ll be able to lobby him for the defense industry.

Howie: Right, which is what he plans to do. He’ll deny that but that’s exactly what’s going to happen. 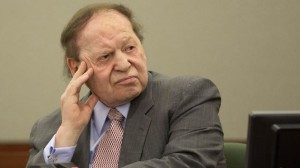 David:  You’ve written for several months that he owes money to Sheldon Adelson because he’s a degenerate gambler. Do we know if he’s paid back those bets?

My theory is that he was giving Sheldon Adelson inside information.

Remember Buck McKeon gets up in the morning and he gets the same National Security Briefing that the President of the United States gets. Sheldon Adelson, none of his money is coming from Las Vegas. He loses in Las Vegas. His money comes from Macau. He is completely indebted for his fortune to China and they are very interested in the stuff that McKeon hears every morning so I’m sure that Adeslson is not squeezing Buck McKeon to pay back the money.

David: You write on your ‘Down With Tyranny’ blog that there is now a civil war within the Republican Party for Buck McKeon’s seat. Who’s running?

Howie: McKeon is trying to bring in his own successor.

This guy Tony Strickland, former State legislator, but the republicans in that district detest Strickland. They see him as a carpetbagger and also as a very, very corrupt guy.

So, they recruited their own candidate, State Senator Steve Knight. The problem with Steve Knight is he is the single most right wing politician in the State of California. There is nothing more right-wing than this guy, it’s frightening. So, here we have a very very corrupt Republican backed by McKeon who’s also very right wing, and then the most right-wing California politician, who’s not backed by McKeon, and they’re already going at each other in a big, big way. There’s a huge civil war going on which is going to amp up in a very big way.

David: And who’s going to win the primary?

Howie:  Between those two it’s very, very hard to say. I mean, who would win between a shark and an alligator? 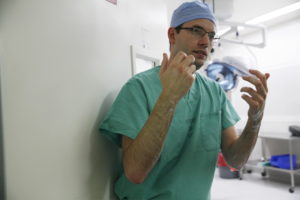 Howie:  Lee Rogers, who was the National Spokesperson for the American Diabetes Association, he runs like 8 hospital programs. He is a renowned surgeon who goes all over the world giving lectures about how to save people’s limbs who have diabetes so they don’t have to amputate their limbs. That’s his specialty and he’s known as the foremost expert in the whole world on that. And he’s running for Congress. He’s someone who wants to actually go in there and fix the Affordable Care Act in a way that’s going to make some sense. Very, very sensible guy.

Howie: Remember we have that jungle primary now so everybody jumps in together. So, there’s will be a number of Republican and a number of Democratic all running together. But the three names that we just talked about, Strickland, Lee Rogers, and Knight those are the three people that are in it for real. There are other joke candidates, people running because it will help them and their career in the comedy industry for example. like some girl literally ran last time because she thought it would help her sell tickets because she’s a stand-up comedienne.

David:  I got to go file my papers to run for office. Howie Klein, thank you very much.

Howie: My pleasure, it was fun.

Howie Klein is founder and treasurer of the Blue America PAC and writes the Down With Tyranny blog.