February 7, 2014 - David Feldman Show, The News From Around The World, Top Stories, Transcripts

After President Obama’s fifth State of The Union, GOP Congressman Michael Grimm was being asked on camera for his reaction to the president’s speech. When questions turned to ethics investigations into Grimm’s alleged campaign finance irregularities Congressman Grimm cut short the interview with NY1-TV political reporter Michael Scotto.

Thinking the camera was no longer running Grimm got into Scotto’s face, threatened to throw him over the balcony saying, “I’ll break you in half. Like a boy.”

Tape of the incident quickly went viral as other people came forward recounting their experiences with the 44-year-old ex Marine’s violence laced temper.

Melanie Sloan is Executive Director of Citizens for Responsibility and Ethics in Washington, DC. She recently filed an ethics complaint against Congressman Michael Grimm.

David: Melanie, who is Michael Grimm?

Melanie Sloan: Michael Grimm is, I believe, in his third term now. He’s a congressman from Staten Island, and Mr. Grimm has had ethics problem after ethics problem.

Melanie: He is running for re-election.

David:  Is that a safe seat for him?

Melanie: It is considered a safe Republican district. 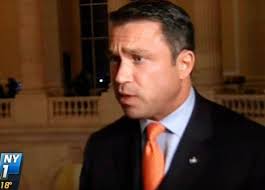 Congressman Grimm about to threaten a reporter. Grimm served in the Marines and then became an FBI agent.

David: He threatened a reporter with violence right after the State of the Union. He was having a bad day. I mean, who hasn’t threatened to throw somebody over a balcony?

Melanie:  I haven’t. I don’t know if you have. It’s a pretty bad thing to do, particularly if you’re a member of Congress and you’re being asked questions by a reporter. The fact that you don’t like the questions isn’t a reason to suggest to the reporter that you’ll throw him over the bridge and break him in half.

David: We have an entire Congress threatening Iran with violence. Isn’t that what congressmen do, they threaten violence?

Melanie: I think it’s pretty different. Discussions about foreign policy are not at all the same as having a member of Congress personally threaten bodily harm to a reporter who’s asking legitimate questions.

David: By threatening a reporter with physical violence, is Congressman Grimm violating any specific House rule?

Melanie: Yes, there’s a House rule number 23 that says you may not engage in conduct that reflects discreditably upon the House. It’s intended to be a very inclusive rule that encompasses all sorts of conduct that might make Congress look bad. And clearly when a member of Congress threatens a reporter, asking legitimate questions, with bodily harm, that makes Congress on the whole look bad.

David: Michael Grimm is a rarity in the Republican Party. He’s actually served in the armed forces. He was an FBI agent. I think there are a lot of people who saw the widely circulated video and thought ‘Good. Somebody finally standing up to the media.’

Melanie: You know, the problem for Mr. Grimm is that he’s under a federal inquiry and ethics investigations already, and clearly he has a short fuse about it. But if you’re going to be a member of Congress, you have to be able to stand tough questions, and there have been some very tough questions to be asked about Michael Grimm’s conduct.

David: Your organization, CREW, has named Congressman Grimm one of the most corrupt members of Congress.

Melanie: Yes, he has been the subject of an investigation about whether or not he has raised money illegally and whether he, in return for accepting campaign contributions, offered to help people with their immigration status.

David: So let’s focus on the campaign finance irregularities. 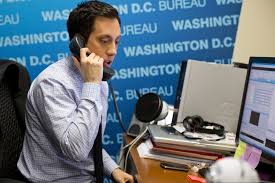 Michael Scotto is a reporter for NY1. Grimm threatened to throw Scotto over the balcony when questions turned to Grimm’s ethics problems.

Melanie: During the 2010 election cycle, Representative Grimm was frequently seen with an Israeli citizen and close aide to a well-respected rabbi in New York. This Israeli citizen’s name is Ofer Biton. And Mr. Grimm and Mr. Biton travelled around the New York region together. Mr. Biton helped Grimm raise money from this rabbi’s followers.

And several of the rabbi’s followers who spoke anonymously to reporters said Representative Grimm had told donors there were ways to evade campaign finance laws. And one person said that Grimm had requested a $20,000 contribution and set a meeting near the FBI building in lower Manhattan, where the follower then met Grimm and gave him a cash-filled envelope with $5,000. And a week later, the same person gave Grimm another $5,000.

David:  And you’re allowed to give how much cash each election cycle?

Melanie: Well, it varies. Each election cycle, it goes up slightly. You know, I think last cycle it was $2,500 to a primary and $2,500 for the general. So if you were giving a cash-filled envelope with $5,000 for the general election, you would have gone above the campaign finance limit.

David: What are Grimm’s other campaign finance irregularities that CREW is concerned about? 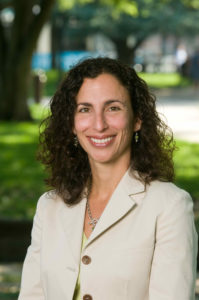 Melanie Sloan is the executive director of CREW and filed the ethics complaint against Congressman Grimm.

Melanie: There’s an ongoing federal inquiry into whether Representative Grimm was getting straw donations.

David: What are straw donations?

Melanie: Straw donations are donations made by one person in the name of another. So it’s a way to cover up who’s really making the donation. It’s a conduit contribution. If you’re a candidate, and I made a contribution to you, but really somebody else was giving me the money to give to you, then that would be a “straw donation.”

David: What other ethics problems does Congressman Grimm face?

Melanie: He’s had a series of other minor ethics problems as well. He used his position to help the security firm of a friend. He made a video ad for that friend, and members of Congress are not allowed to use their status to endorse any commercial enterprises. The guy just is really lacking an ethical compass.

David: Can anybody file an ethics complaint against a U.S. congressman?

Melanie: Anybody can file an ethics complaint with the Office of Congressional Ethics. This was an office that was established in 2006 in the wake of many, many ethics scandal in the House because the House Ethics Committee does not accept ethics complaints from outsiders, only from members of Congress.

So this Office of Congressional Ethics is the place where anybody can file a complaint, and they do a preliminary investigation, and if they’d find that there’s probable cause to believe an ethics violation may have occurred, then the complaint gets forwarded to the Ethics Committee.

David: Is that process bipartisan?

David: When was CREW founded?

Melanie: I founded CREW back in 2003, and if your listeners would like to learn more about CREW, they can go to our website, www.citizensforethics.org.

David: Thank you for your time.

Melanie: Thanks for having me.

What do you think of Congressman Grimm? I’d like to hear. Please join the conversation below.